The average 25% Obamacare premium hikes next year are only the tip of an iceberg. Each taxpaying household will bear an average cost of $536 even if they’re not enrolled in Obamacare.

The White House pooh-poohs higher premiums by saying that the insured won’t pay the full amount; subsidies will cover part of it. But subsidies come from tax dollars and from borrowing to increase the national debt.

FOX News reports the additional subsidy cost to taxpayers will rise $8.5-billion next year, on top of the 2016 subsidy costs of $43-billion, raising the annual subsidies to $51.5-billion. The country has about 96-million households that pay federal income taxes, so this averages to $536 per household. Each year. On top of the higher premiums for the insured.

Of course, corporate taxes will cover some of the bill–but those taxes are passed along to consumers via higher prices on goods and services.

Obamacare (mis-named as the Affordable Care Act) is a vast collection of federal red tape, regulations and mandates managed by federal bureaucrats and government-paid agents.

The new premium hikes are a double-whammy: They hit those who have Obamacare coverage AND they hit every taxpayer. 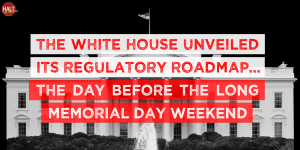 The White House released its regulatory agenda of new red tape. They did it quietly on the eve of a holiday weekend, namely the Thursday evening before Memorial Day. Issuing such notices about red tape is required by law.

An American Action Forum (AAF) review of the agenda found more than $110 billion in potential costs, with billions more in unknown burdens. No wonder President Obama wanted it announced with a whisper, not a shout.